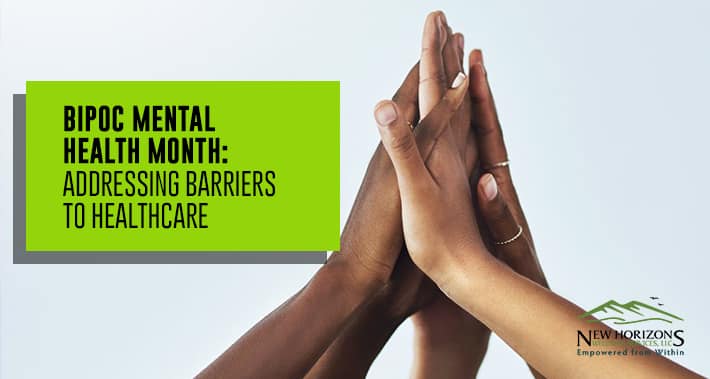 In 2008, National Minority Mental Health Awareness Month was established to help us address the unique mental health concerns people of color have here in the United States.

In 2020, these issues are more pressing than ever, due to ongoing civil unrest and the COVID-19 crisis.

Here at New Horizons Wellness Services, we specialize in helping racialized individuals overcome the challenges of living with the unfortunate reality of prejudice.

However, there are significant barriers in the way of seeking counseling & mental health services for BIPOC individuals (more on this term later).

Read on to find out more.

A Note On The Label “Minority”

When working with individuals in a mental health environment, it’s important to take a “person-first” approach.

What this means is to refer to someone as a person with a disorder, rather than the disorder itself.

You may have heard, for example, someone refer to someone as “an autistic”, but this language can be dehumanizing.

The reality is, a person with autism spectrum disorder is, like anybody, a complex and unique human being – their autism is just one aspect of who they are.

Consider this approach for the phrase “minority” as well – referring to a group of people as “minorities” can be just as dehumanizing.

Instead, some organizations have pivoted to using the term BIPOC instead of minority.

BIPOC is an acronym standing for black, indigenous, and people of color.

It considers not just African-Americans and indigenous peoples, but all those with a racialized experience in the United States.

According to research from the American Psychiatry Association, black Americans experience mental health concerns at a similar rate to the general population.

However, it’s generally known that BIPOC folks seek out care at lower levels than the general population.

Let’s take a look at some of the reasons why that is. 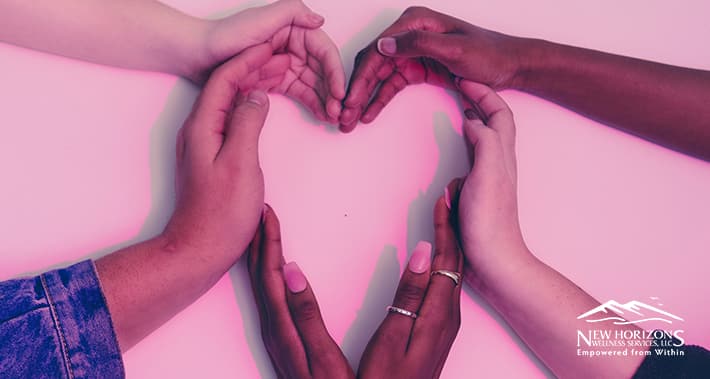 BIPOC individuals in the United States lack access to healthcare in greater numbers than the general population.

According to research from KFF, a non-profit healthcare research firm, 11.5% of black people in the United States are uninsured, compared to 7.5% of white people.

The numbers are even worse for Native American and Alaskan Native people – 21.8% of them lack access to health insurance – and for Hispanic people, 19% of whom are uninsured.

A 2009 study published in the Annals of the New York Academy of Sciences states that for Native American and Alaskan Native people, the death rate for adults significantly exceeds that of the general population. In particular, it cites diseases related to poor nutrition, substance abuse, and mental health struggles.

But even for those BIPOC individuals who do have health insurance, they generally receive lower quality service than their white counterparts, and in particular, lack access to care from practitioners who understand their experiences.

Why is this significant?

While a white therapist may be able to understand from an academic perspective the struggles of a BIPOC person, they are fundamentally incapable of being experts on the subject.

As a result, if you identify as BIPOC, seeing a therapist can end up being a frustrating experience as a you spend more time educating them on your experience than you do addressing your actual concerns.

This can seem even more exhausting than simply dealing with your issue on your own, leaving you wonder why you just paid a therapist to teach them rather than them helping you.

3. Lack Of Trust In Healthcare Providers

We mentioned above that BIPOC folks tend to experience mental illness at similar levels to the general population.

However, it’s also known that many BIPOC individuals in the United States with mental health concerns don’t seek treatment. Why?

V.N. Gamble’s 1993 paper, A Legacy Of Mistrust, explores the racism that pervades many American healthcare institutions, with a specific eye toward the Tuskegee Syphilis Study.

399 of them were found to have contracted syphilis, but rather than tell them of their disease status, they were fed placebos and told they were being treated for “bad blood”.

The study went on for 40 years, with none of the infected men ever having received treatment, and only ended when information on it leaked to the public.

The Tuskegee Syphilis Study is one of the most infamous medical studies in history, underscoring the incredible amount of racism baked into the American medical system.

This, and many other studies like it, has sadly contributed to a lack of trust in healthcare providers in the black community.

A 2009 paper by Katz Et Al, for example, found that more than 80% of black people in Tuskegee, Birmingham, and Hartford, believe that the men in the Tuskegee experiment were actually injected with syphilis.

How Can We Overcome These Barriers?

If you’ve had a difficult experience in seeking out mental health services in the past, you’re not alone.

The process of finding mental health services that actually recognizes you as the expert on yourself, who will have at least a baseline understanding of your experiences, and who can provide real, genuine solutions that work, isn’t easy.

Here at New Horizons Wellness Services, we strive to provide an environment where, as much as possible, your therapist matches with your lived experience.

As a black-owned clinic, we recognize the unique concerns people face living as BIPOC in the United States.

This month is BIPOC Mental Health Month. Why not take this opportunity to reach out to New Horizons Wellness Services, to find out how you can benefit from mental health services from someone who understands your experience?

Living in 21st century America as a racialized person isn’t easy, but we’re here for you.