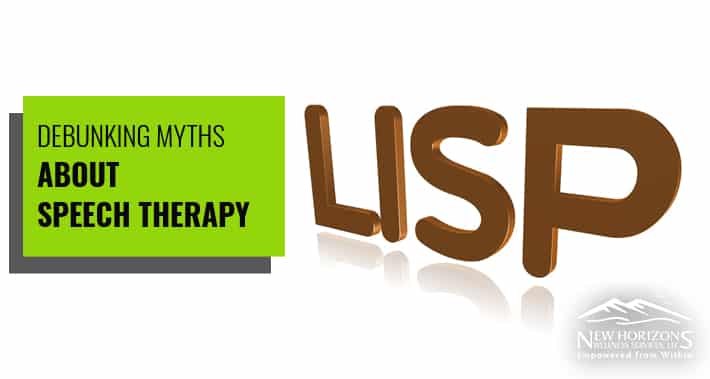 When it comes to speech therapy, it’s important to separate the myths from the truths.

In order to fully understand the purpose of speech therapy, how it’s used and the benefits which come with it, first you need to cut through the myths and falsehoods which surround it.

If you’re looking for Tigard Oregon speech therapy, we’re New Horizons Wellness Services, and we can help you learn the truth about speech therapy.

Let’s take a look at some of these myths.

We’ll consider why they’re false, and what the truth is.

When asked reasons why someone might undergo speech therapy, having a stutter, or lisp are likely the two main reasons which come to mind.

This is likely because they are the most noticeable speech difficulties, especially to those without a broad understanding of speech disorders.

Although these are both very valid reasons someone may have speech therapy, they aren’t the only ones.

Speech therapy can help with a wide range of issues including:

It’s no question kids take after their siblings.

From favorite toys, to modeling behavior, passing things onto siblings is inevitable, so you’d think it would happen with speech as well, right? – children will mimic the way their brothers and sisters talk.

Although kids will interact with their siblings, they are also hearing speech from teachers, parents, babysitters, and countless other adult role models.

These influences will generally outweigh any patterns picked up from siblings.

If You Have A Bilingual Home, Your Child Is More Likely To Develop A Speech Disorder

In some cases, children living in bilingual homes may speak less than their unilingual counterparts.

As well, if these kids mix their two languages together in the same sentence, some people may see this as being a sign of a language disorder.

In reality, it can be normal for kids learning two different languages at once to speak less than others, as they are trying to process learning the grammar rules and structure of both at the same time – this doesn’t mean they have a speech or language disorder.

Furthermore, mixing languages is completely normal, and growing up in a home where they are learning multiple languages has been shown to be beneficial for brain development.

If Your Child Isn’t Expressing Themselves, It’s Because Of An Intellectual Disability

Some people think that if someone is unable to express themselves clearly, it’s a sign of lower intelligence.

In some cases, the inability to express themselves the same way their peers can, may make children feel “stupid”, and this is especially highlighted when speech issues are not properly diagnosed or treated.

Speech and language disorders can occur in people of all intelligence levels.

An inability to express one’s thoughts and feelings doesn’t mean they aren’t as smart as other kids around them, it just might mean they need a little extra help to get to the same level as their peers from a communication perspective. 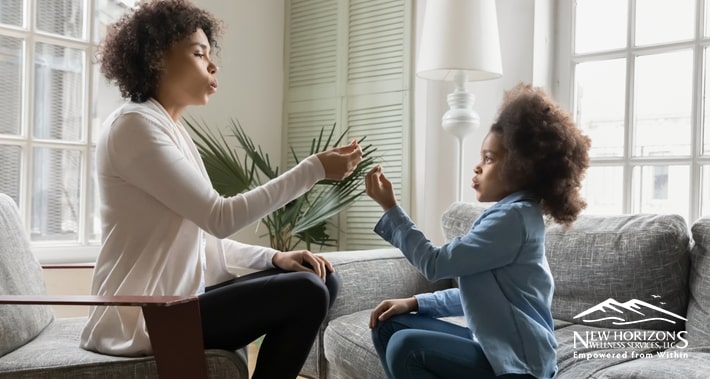 At a glance, some of the exercises used by a speech therapist for kids to help develop their speech may appear to be just “playing games”.

And while some of these may indeed be games, there is more to the story.

Let’s be honest, even as adults most of us don’t want to do things regularly if they’re boring.

If you have a weekly meeting you dread, or chores you continuously put off doing, you know what I mean.

In order for children to make progress in their speech therapy, they need to be engaged in the sessions, and exercises need to be easily replicated at home by parents.

And the best way to do this is by having fun and turning things into games.

Your Child Will Grow Out Of Their Speech Disorder

Just about everyone can share an anecdote about a kid who didn’t speak at the same rate as their peers, but quickly caught up when they got older.

This, however, is not the case every time.

As a parent, you can’t know if your child will catch up on their own, or if they will need interventions from a speech therapist.

If you are thinking you should get your child tested for a speech or language disorder, then don’t listen to everyone saying “oh they’ll catch up” – and get an evaluation to find out from a professional Speech Language Pathologist.

In most cases where speech therapy is needed, early intervention is key.

The earlier you pursue treatment for your child’s speech disorder, the more effective that treatment will be.

This is because your child hasn’t had as much time to form bad habits around their speech.

There are only so many hours in a day, and this might mean your child may occasionally need to miss school in order to see their speech therapist.

Parents may also worry about a child being singled out or bullied for missing class time.

Over the long term, you child will get more benefit from speech therapy sessions, than they will if they don’t.

Worries about bullying for missing class, for example might be replaced by worries of being shut out from peer groups if they don’t catch up with their language development.

Are you worried your child’s speech isn’t developing at the same rate as their peers?

Had you been putting off looking into speech therapy, because of any of the above myths – which we’ve now debunked for you?

We’re New Horizons Wellness Services, and we offer speech therapy services, for both adults and children.

Contact us today to set up an appointment, or for more information on our services.

New Horizons Wellness Services, LLC
3.9
Based on 20 reviews
See all reviewsWrite a review
I recently took my son here for speech therapy. Our therapist, Mary, was fantastic and we are already seeing great progress! I’d recommend this clinic to everyone!

Nathaniel R.
My son has been receiving speech and OT services at this clinic. That staff is very helpful and polite. The therapists have been wonderful and the progress we've seen had been... incrediable. I would reccommened this clinic to anyone who is seeking therapy services.read more

Misbah B
The office staff is incredibly nice, helpful and informative. As a person of color, I appreciate their understanding of different cultures and would highly recommend NHWS to... anyone Looking for experience therapists good quality therapy.read more

Eureka K.
Melodie at NHWS is absolutely fantastic with helping my child (and myself) navigate challenges and equip them with tools to be successful.

Tara M.
Thank you! People working here have always been friendly and ready to help me. They are very professional. I am always really glad I decide to come to this office. It is also... helpful that the location is easy to find and has a large free parking area.read more

Carolyn J.
New Horizons Wellness Services is a family and employee-friendly place. My son received OT and Speech services here and the providers were outstanding. The skills he learned... helped him to build his confidence. He learned so many skills that have helped him succeed in school and at home. All of the providers are dedicated to their patients and are truly exceptional! The admin staff rocks too!read more

Kiri T.
New Horizon's Rocks! The staff here is amazing. Great location, just off I-5. I highly recommend this place!

Jagadesan J
I love the staff here. They are amazing; they are kind, patient and listen to your needs. I have known them for more than 3 years and have only had positive experiences to share.... I highly recommend them.read more

Mary R.
Thank you so much for the practictical tips, Melodie!