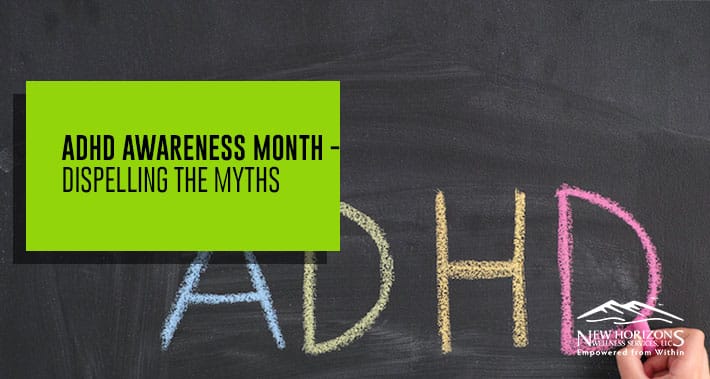 Did you know that October is ADHD awareness month?

It was launched in 2004, and was bolstered into a month-long awareness campaign in 2010.

However, it’s been apparent for much longer than that that treatments for kids with ADHD was important.

Before the awareness campaigns started, there were a lot of myths circulating about ADHD – proving why education is so important.

To kick off ADHD awareness month, we’re going to review those myths.

Our hope is to create a more compassionate and inclusive country for kids who have ADHD.

ADHD is a neurodevelopmental disorder that is usually diagnosed in childhood.

Most commonly, it will also persevere into adulthood.

Keep in mind: there are about 10 million adults with ADHD; each one of those adults was once a child with ADHD.

Ranging in severity, common symptoms include:

Now, remember that it is normal for kids to have a hard time focusing or behaving sometimes – it’s all part of childhood.

The difference for children with ADHD is that they don’t grow out of the behaviors in the same way, because their brains are physically different.

So what’s the truth about ADHD?

Well, let’s have a look at some of the myths that are popular, and why they’re false.

Some people just want to believe the worst in people, but there are also those who might not really know what ADHD is.

To them, it LOOKS like kids with ADHD have trouble concentrating, and since they don’t know the science behind the disorder, they diminish its importance.

In reality, there exists more than 100,000 articles in science journals supporting the research and knowledge around ADHD.

There are medical textbooks from as early as 1775 that address ADHD.

Another way it’s wrong: yes, even people who have ADHD are able to concentrate, as long as they are interested in what they’re engaged with.

ADHD is the result of issues with the chemical dynamics in a person’s brain.

What an interesting thing to say, don’t you think?

We don’t need to get into feminist theory here to know that this particular claim has no real merit.

The truth is that girls also have human brains in their craniums, so they are also diagnosed with ADHD.

Where this myth likely comes from is the fact that boys ARE diagnosed with ADHD two to three times as frequently.

Amongst girls, roughly 4.2% of them will be diagnosed with ADHD at some point in their lives.

3. MYTH: Your Child Will Grow Out Of Their ADHD, Don’t Worry

Here’s likely an example of good friends trying to comfort a parent who doesn’t understand what’s happening to their child.

Most of us want the best for others, and offer up kindly-meant platitudes.

Unfortunately, their compassion doesn’t make this any less true.

Up to 85% of people with ADHD will continue to see significant symptoms into adulthood.

The key to note is that you can manage symptoms effectively, starting in childhood.

By taking your child for a test and formal diagnosis, you gain the opportunity to avert life-changing social issues.

4. MYTH: Doctors Will Hand Out ADHD Diagnoses To Any Kid Who’s A Little Playful

At some point the idea popped up that Doctors were diagnosing children unnecessarily, for some unknown reason.

I’m sure we could find conspiracy theories out there about pharmaceutical companies.

However, no doctor will diagnose ADHD without good cause.

The truth is that the more we understand about this particular disorder, the better we are able to refine how we test for it.

The rates of ADHD diagnoses can increase or decrease as a result of our change of measurement methods, or perhaps the diagnostic criteria.

An unfair and hurtful opinion, it also happens to be one hundred percent untrue.

ADHD is medical condition; parenting has zero effect on whether ADHD exists or not.

Good parenting can, however, improve the outcomes for children with ADHD.

The truth is that this disorder is a combination of different factors, including genetic and environmental.

However, as we mentioned above, learning to manage behaviors for positive outcomes can lessen the severity the symptoms.

The converse is true – if ignored, or the child’s living situation is too chaotic, it could also make the symptoms worse.

A proactive approach is best, for these children.

Remember, the first step to living with ADHD in your family is to face it head on.

If you have a child that you suspect may have ADHD, bring them to us for testing, so you know for sure.

Call now to book your appointment with New Horizons Wellness Services, and we will help you determine the truth about your child’s ADHD, and we can help you create a plan to tackle it.