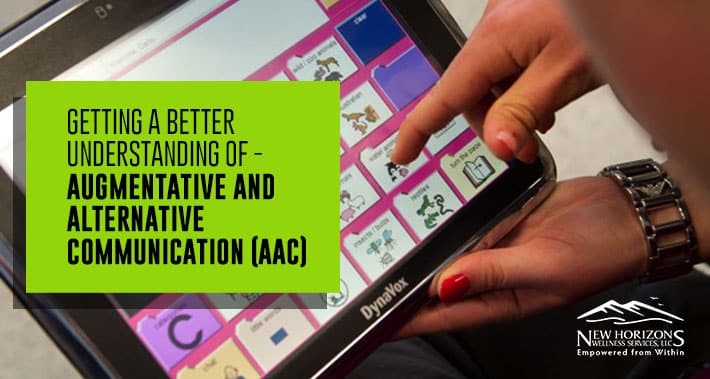 It’s something many of us take for granted.

It’s the default form of communication that the vast majority of us use.

But for others, it’s not that simple.

Today, we’re going to be talking about AAC – augmentative and alternative communication.

speech therapy for children may make use of AAC in order to make it easier for some children to communicate.

If this is a new term for you, you’re not alone.

But AAC is widely used among both children and adults alike.

What Is Augmentative And Alternative Communication?

Simply put, AAC encompasses all the different forms of communication outside of actually speaking words.

This includes simple things we use every day but don’t think about – like facial expressions, hand gestures, and writing things.

It also includes more adaptive communications systems, like someone who points to pictures to convey ideas, or uses electronics to speak for them.

Research on the use of AAC is tricky, since there’s so much variability in diagnosis, age, type of AAC used, and how much it’s used.

Most speech language pathologists, though, agree that the number of AAC users is growing.

A 2019 master’s thesis by Allison Phelps found that about 10% of children in Missouri undergoing speech therapy had their therapist use some sort of AAC in treatment.

There’s no reason to believe the rest of the country is much different in this regard.

Broadly speaking, there are two categories of AAC – aided, and unaided.

What Is Unaided AAC?

Unaided AAC is a method of communication that doesn’t require external aids to use, like the name suggests.

Other than the examples listed above, one of the most well-known forms of unaided AAC is sign language, where folks who are hearing impaired use hand and body gestures to convey ideas.

Naturally, they require a certain degree of motor control.

What Is Aided AAC?

Aided AAC is a method of communication which you need some sort of supportive device to use.

Some of these systems are fairly basic.

For example, if you’ve ever written a question down on a piece of paper because you were in a particularly noisy room, you’ve used aided AAC.

Others tend to be higher-tech.

More common examples might include a device with buttons or a touch screen the user can push to speak out loud for them.

The most famous example of an aided AAC system might be the DECtalk system, which Stephen Hawking used to communicate.

Broadly speaking, AAC is useful for those who have difficulty communicating through speech.

That’s a big umbrella, though, and may include folks with congenital disorders, like: 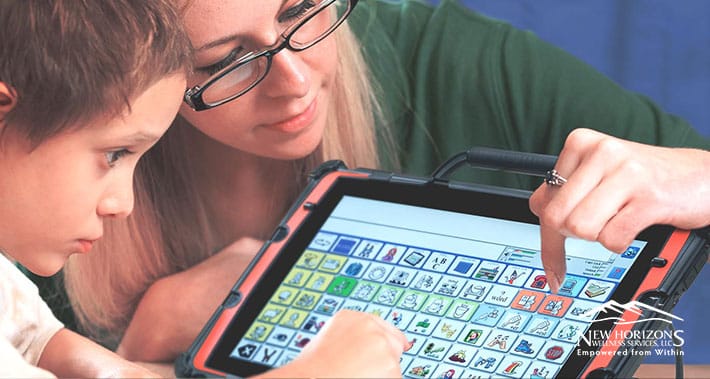 Because it’s a relatively small portion of the population who uses AAC, there are a number of misunderstandings and misconceptions about their use.

Let’s take a look at some of them.

This is a common reaction to parents being told their child may need AAC.

However, research has shown that early use of AAC can not only improve vocabulary, they can actually improve their speech and communication skills in general.

2. Kids With Cognitive Impairments Can’t Learn To Use AAC

In some limited cases, this may be true, but it shouldn’t discourage you as a parent from considering AAC, regardless of your child’s condition.

A 1989 study, for example, describes the case of a six year old nonverbal girl with severe cerebral palsy, who was nonetheless able to learn to use AAC.

Be aware this study uses potentially triggering language, based on what was considered acceptable in scientific literature at the time.

This is another example that may seem true on the surface, but the reality is the opposite is true.

In the study cited in paragraph 1 above, it was found that kids who were determined to need AAC were able to progress more effectively when they used it than those who didn’t.

How Can A Speech Therapist Help Your Child With Their AAC?

If your child is having difficulty communicating, a speech language pathologist can help.

From there, if it seems like AAC is a good idea, they’ll work with your child to determine what sort of AAC system would work best.

Not every type of AAC will work for everyone, so it’s important to try a few different options before your child finds one that works for them.

It’s more common for children to have a need for AAC systems, but there are times when adults need them as well.

This is usually the result of an acquired condition, like traumatic brain injury or a stroke.

However, the process is similar – a speech therapist for adults will work with you to determine your needs, and help you acclimate to using your new AAC.

An Occupational Therapist’s Role In AAC

While a speech language pathologist may be the first option in providing care in regard to AAC, an occupational therapist for kids has a role to play as well.

Using AAC is uncommon, so as a parent it’s extremely unlike you have any experience with it.

As a result, you might not have the tools or experience to help your child work with their new AAC system.

However, an occupational therapist can.

An occupational therapist’s job is to help your child with the various different roles they need to play in their life, and how to work around their disabilities to perform them adequately.

I hope after reading this you’ve gained a better understanding of what AAC is, what it is not, and how it might be able to benefit your child.

If you’re concerned your child is having difficulty communicating, contact us today to book an appointment.

You’ll get a chance to speak with a speech language therapist, who may recommend a diagnostic evaluation to better understand your child’s situation.

From there, if it seems like AAC is something that might benefit your child, we’ll discuss your options.

It can be concerning to see your child isn’t progressing the way you might expect them to, but you don’t have to deal with it alone.